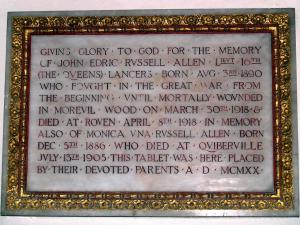 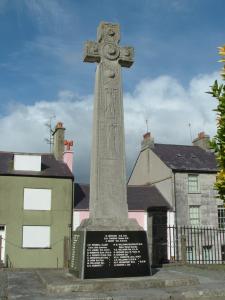 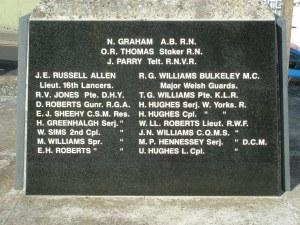 Explore in Theatres of War/Timeline

John Allen was born in 1891 to Russell and Blanche Allen. He had a sister, Monica Una Russell Allen, who is named alongside him in their dedicated memorial at St Mary and St Nicholas Church, Beaumaris. His father was a part owner of the Manchester Evening News. The family residence was at Davenham Hall, Northwich, Cheshire, but they also had a home in Beaumaris where Russell became High Sheriff and Deputy Lieutenant for Anglesey. John served in France and Belgium during the First World War as part of the 16th (Queen's) Lancers. He rose through the ranks, going from Second Lieutenant, to Lieutenant Captain, to Captain. Captain Allen was tragically wounded in action on 30th March 1918 at Moreuil Wood, and died aged 27 just over a week later from his wounds on 8th April 1918 in Rouen, France. He was never aware that he had been promoted to Captain. He is buried at St. Sever Cemetery, Rouen, France.

Explore in Theatres of War/Timeline